Looking forward to the my first Sundance online! 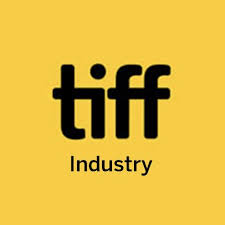 According to Her is on AMAZON, Itunes, Microsoft, Google Play, and Vudu. 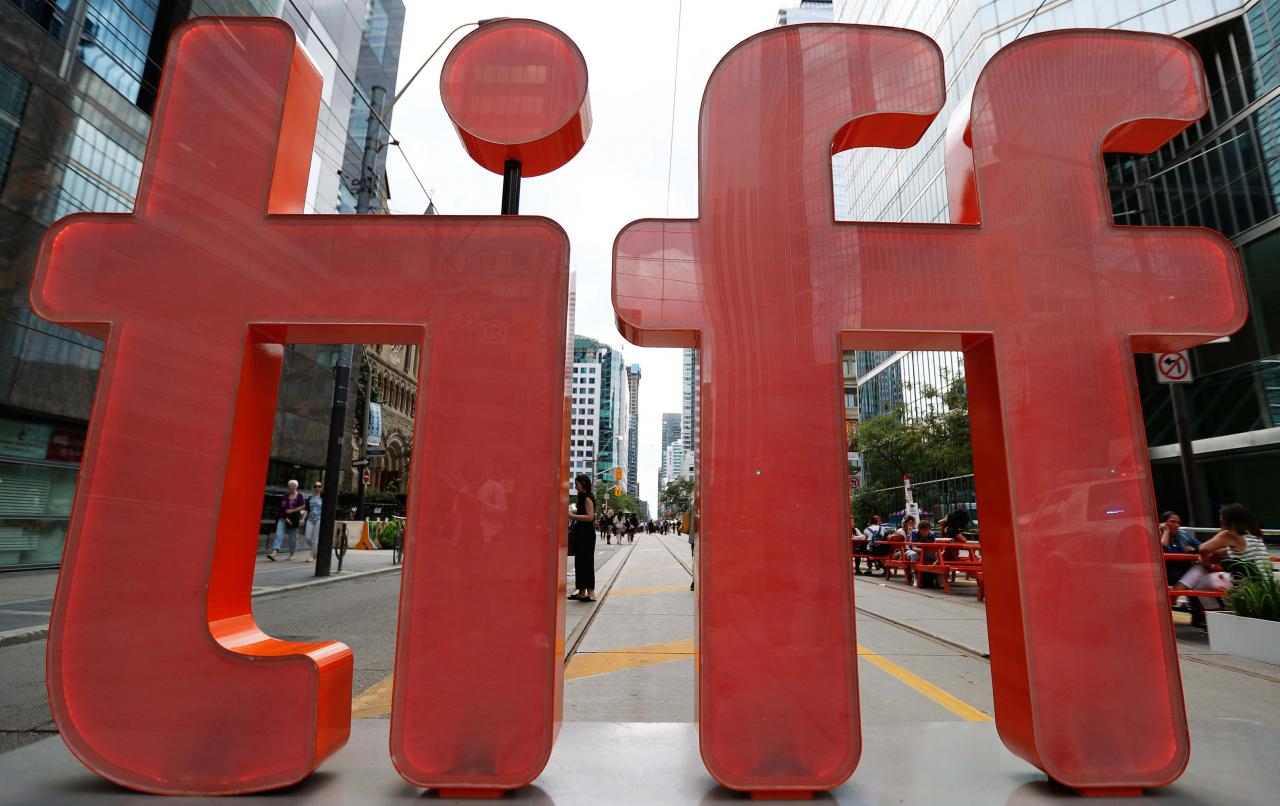 Attending the Toronto International Film Festival 2018
where I have been shortlisted for the Director Lab.
Thank you TIFF!

According To Her has just been selected Discovery of the Week onItunes
also available on Amazon, Google Play, Microsoft and Vudu.

According To Her is now available on Itunes and Amazon.
Also on Microsoft, Google Play and Vudu! 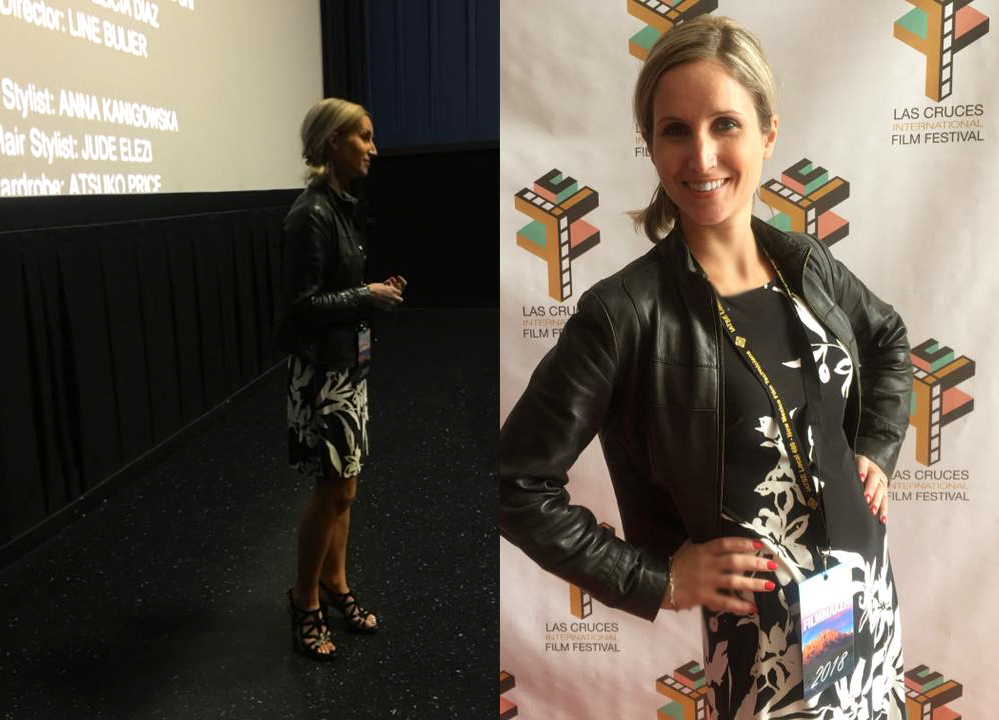 According To Her has been selected to screen at
Las Cruces International Film Festival March 7th-11th, 2018.
Nathalie Bryant is our ambassador.

Back to India! According To Her
has been selected to screen at
All Light India Dec 1st-4th, 2017 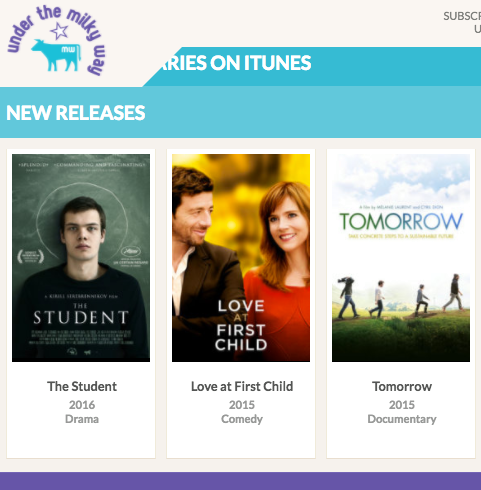 According To her got picked up by Under The Milky Way for VOD/SVOD distribution both in French and in English, in sixty countries. Release date coming soon.

It’s official: Neue Baron designed by Frank Hemmekam in 2013 will be the font of choice for According To Her’s poster.

According To Her is screening this weekend at MIFF Echo, a satellite program of Moscow International Film Festival in Ekaterinburg. 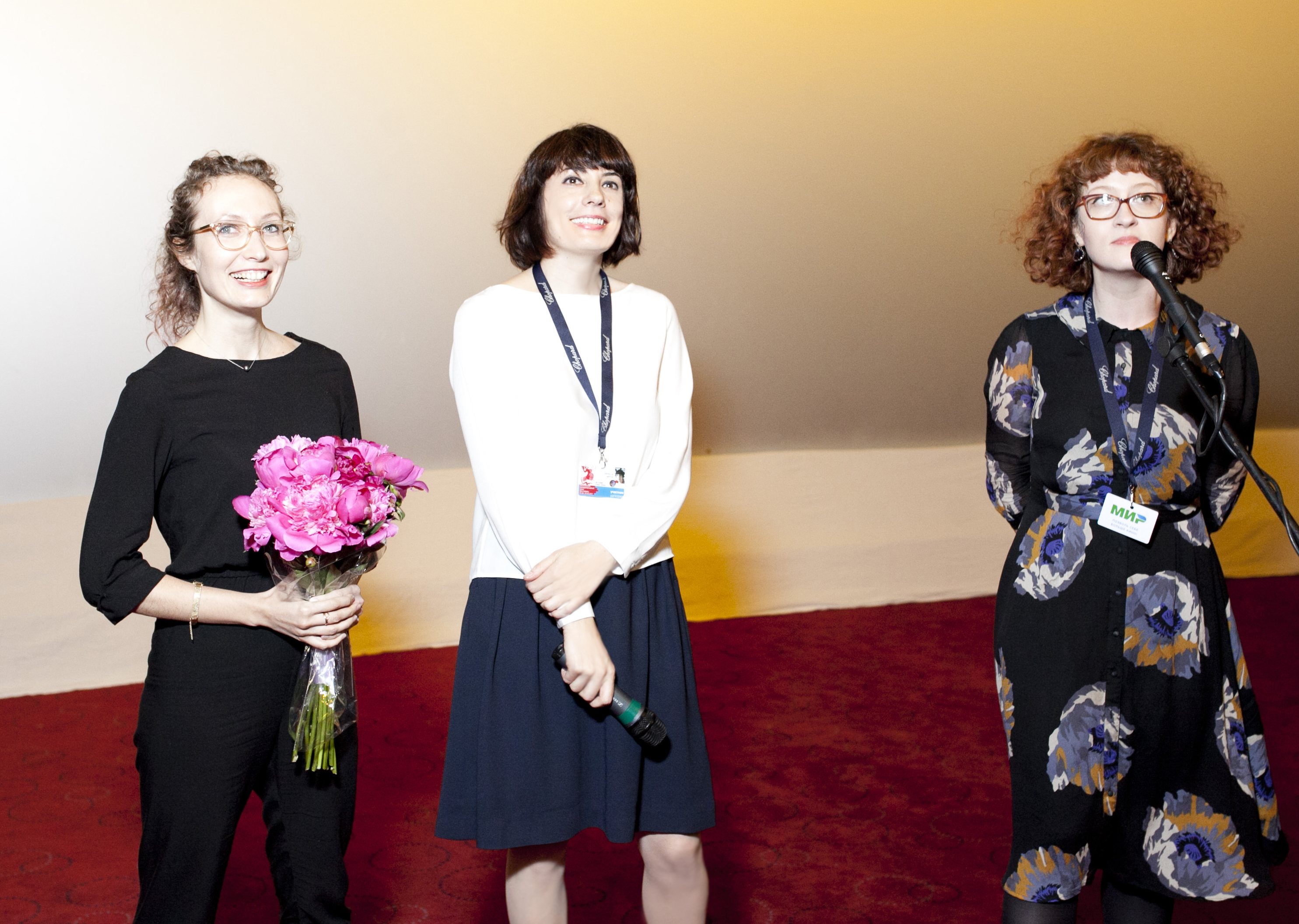 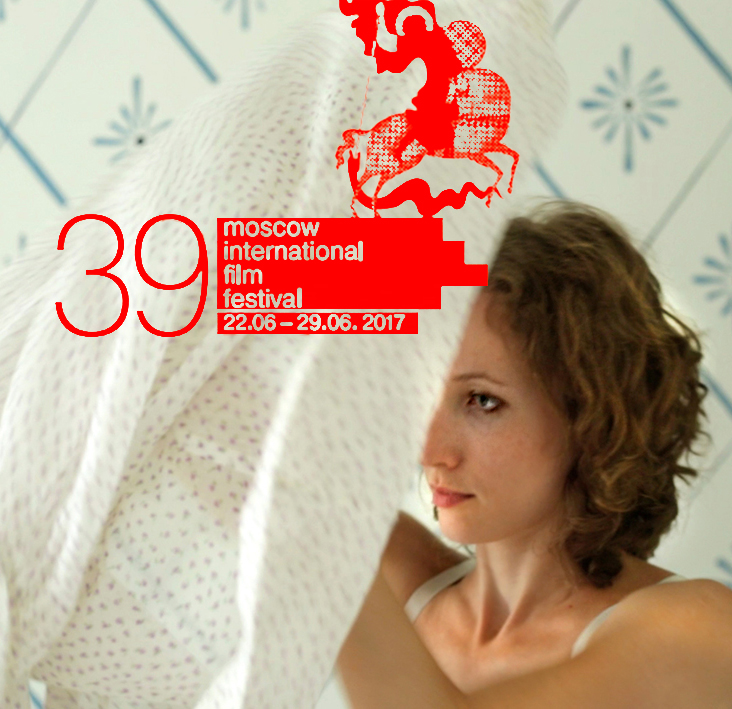 Thrilled to announce that According To Her has been selected by Moscow International Film Festival. Irina Abraham and I will attend to present our feature on June 24th at 4 pm, in the 8th Hall of the Oktyabr Festival Centre, Novy Arbat, 24. Right near Kremlin.

Two awards and two beaming actresses to collect them last night.
To my cast and crew, to everybody who helped this film and to #BFF2017
🍾

I say THANK YOU!

Only five hours to go before our East Coast premiere at Brooklyn Film Festival: Monday 5 at 8:30 and Sunday 11 at 16:00.
Unveiling our new marketing campaign. 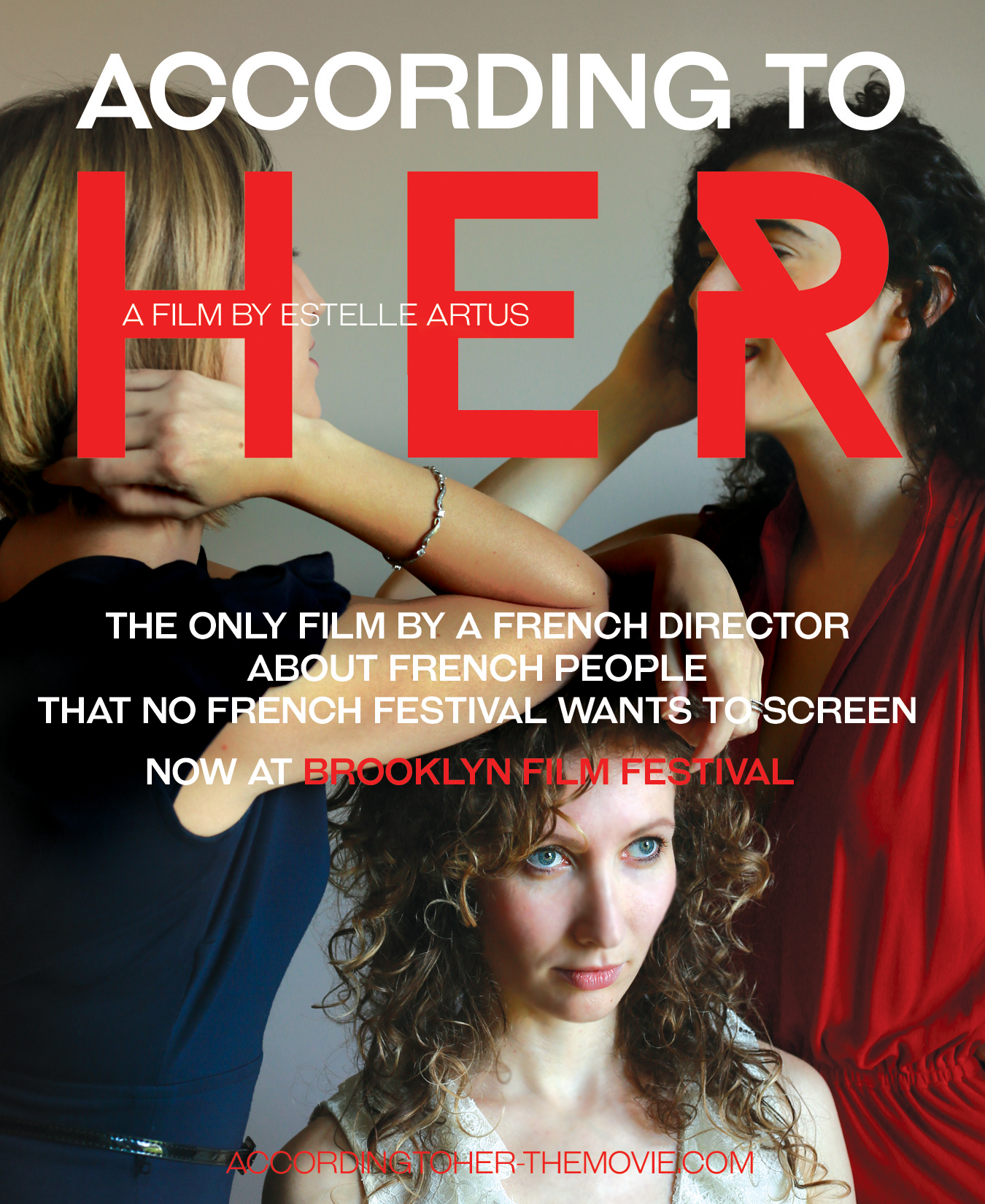 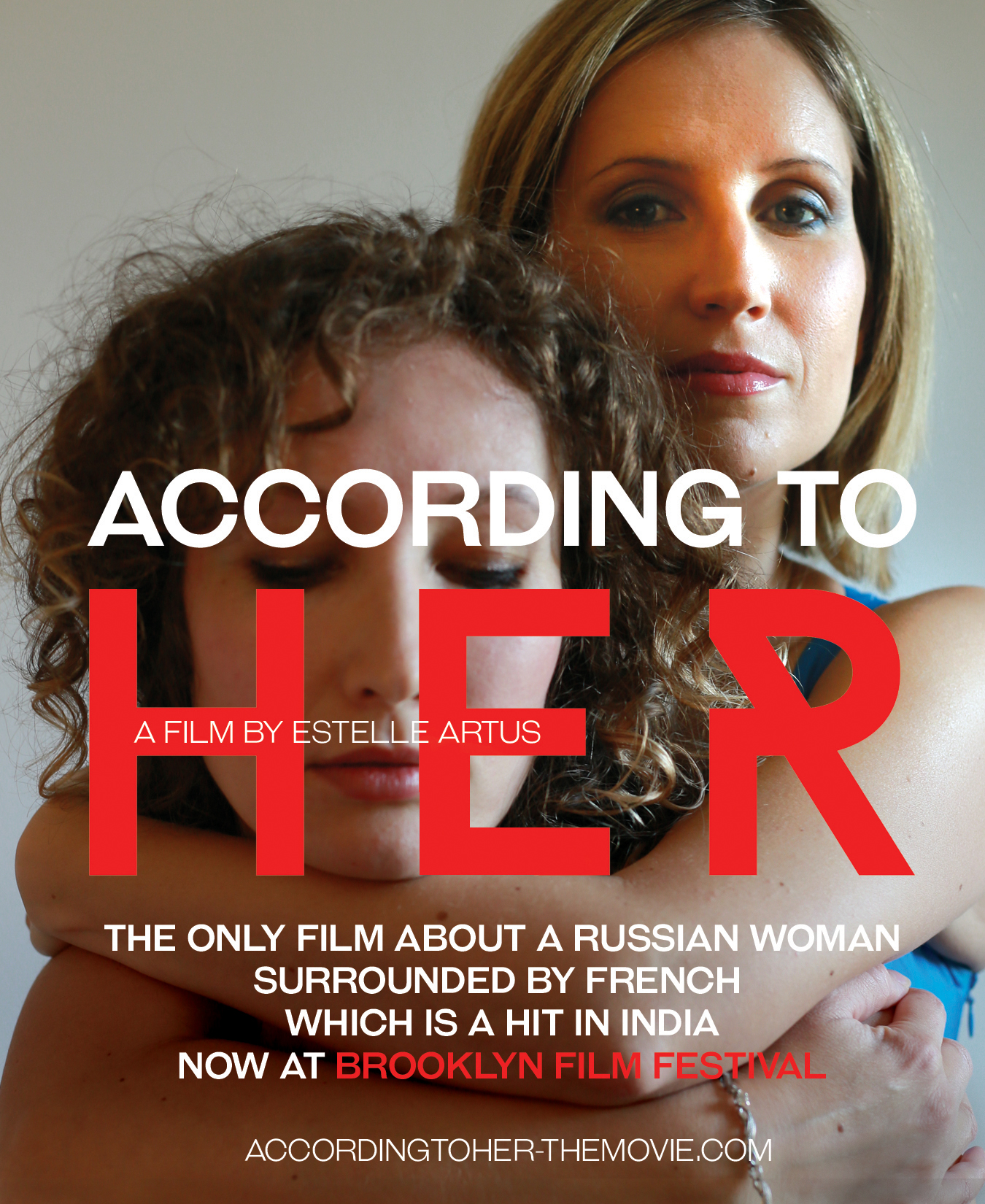 East Coast premiere announced for According To Her at the Brooklyn Film Festival June 2-11 2017.
Screening dates coming soon. 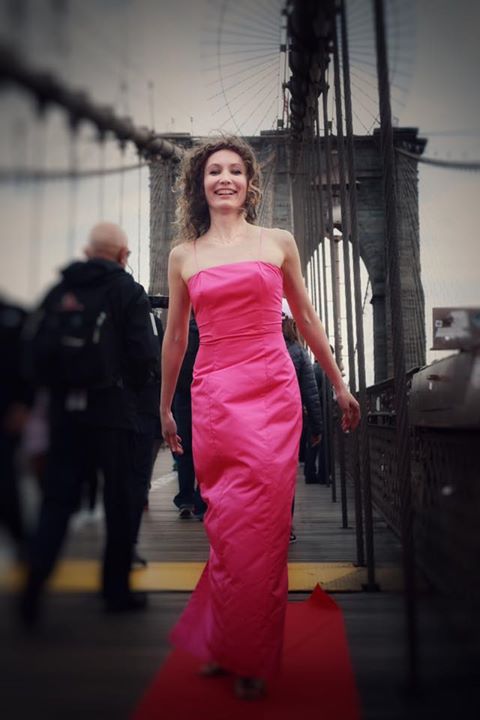 Just got nominated for the… 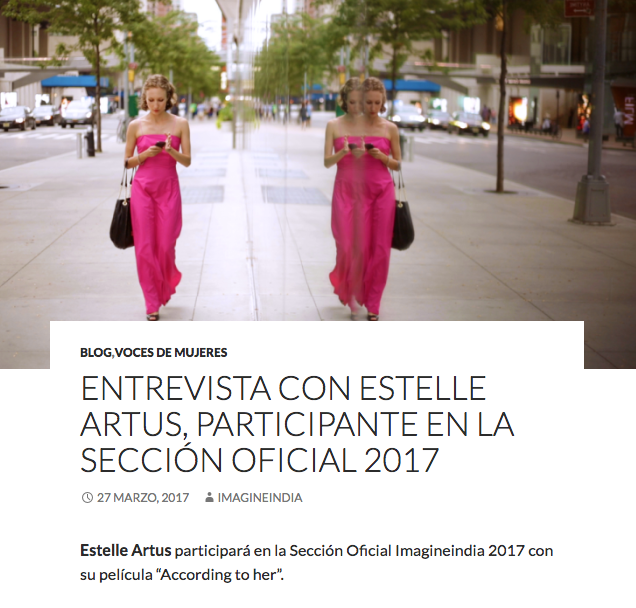 According to Her is selected in international competition for
Imagine India Film Festival
Screening at the
Spanish Film Institute in Madrid, May 17-31 2017.

March 10-17 According to Her is part of FICG32 film market in Mexico.

February 19th at 2pm: one-time special screening of According to Her
at Richard Linklater Studios in Austin courtesy of the AF Austin ciné-club
Thank you to film curator Julia Podgorsek McMahan.

Discover the unique and moving ACCORDING TO HER by Estelle Artus.
In this intelligent and provocative movie, Estelle Artus exposes women issues as well as the destructive power of a cut-from-reality social bubble and the hardship for a closed community to accept someone foreign. A relevant topic in regard of the current social climate.

American Honey, According To Her, The Death Of Louis The XIV… great neighbors at International Film Festival of India – IFFI Goa 2016

Impressive audience attendance at IFFI: According To Her screened twice in a packed 900 seats theater. Thank you IFFI GOA! 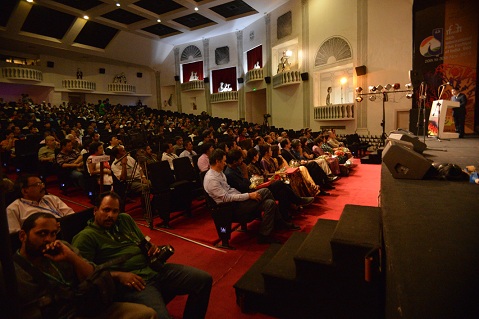 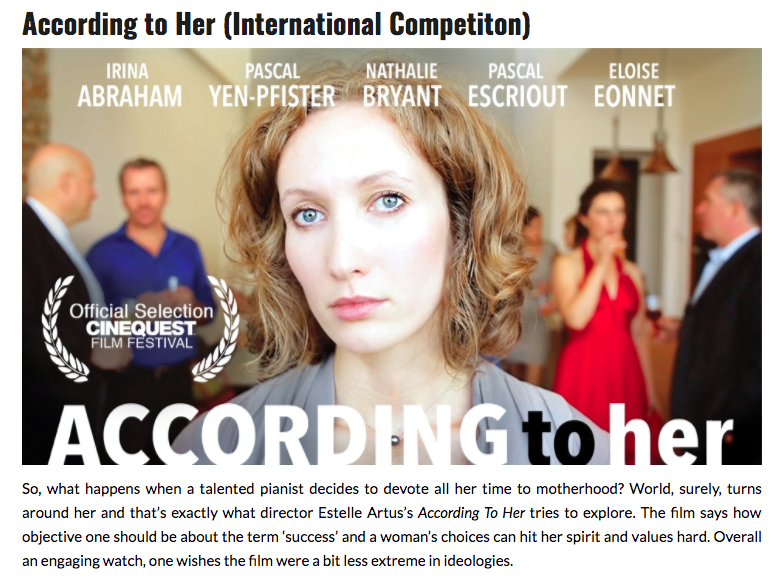 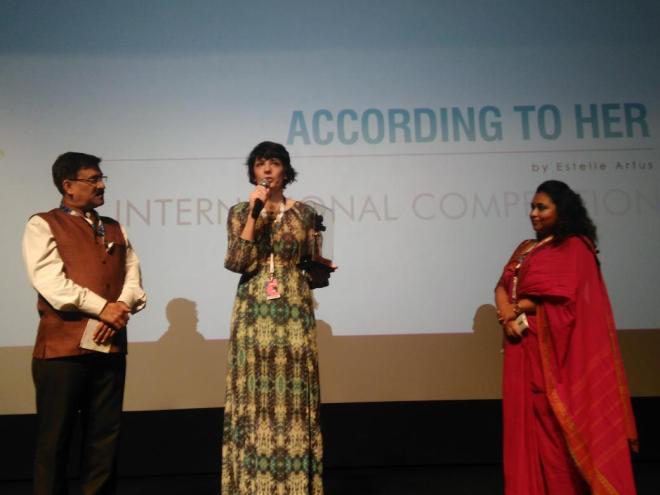 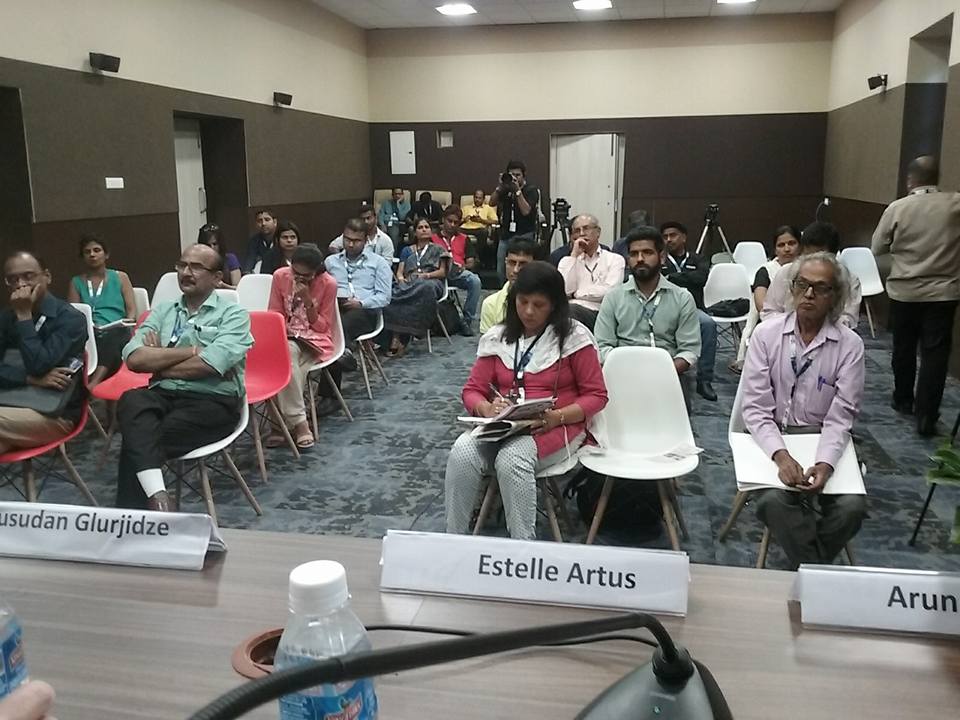 Load of Indian press both online and on prints, among others you can read articles in the Sakal Times and Pandolin. We also got mentions in Goa News, The Prokeraia, Digital Goa, Yashnews, India Times, and one interview of Estelle Artus in The Peackock.

Coming from Cannes, Berlin and Locarno, According To Her is in great company at IFFI Goa 2016.

According To Her is selected for the 47th International Film Festival of India.

Pascal Yen Pfister, the lead actor of According to Her, is playing in Clint Eastwood’s Sully. Congrats Pascal!

If you want to learn how Renoir’s ‘Rules of the Game’ inspired Estelle Artus read this full interview.

Veronica is a bit like the character of Jurieu in Jean Renoir’s The Rules of the Game: she is the outsider, the one who disturbs a social microcosm. More than everything else, it’s the language that makes her foreign. This is why I choose to have three languages in the film. Renoir also took risks when he gave its lead role to Nora Gregor. He chose her because of her accent (she was Austrian). In According to her, Veronica speaking Russian to her son is ‘what separates’. What ‘brings together or separates’ is at the core of my film. Of course it echoes what I saw not so much in New York, but in France, where segregation is a matter of culture and language more than in any other country in the world.

According To Her at The Movie DB. 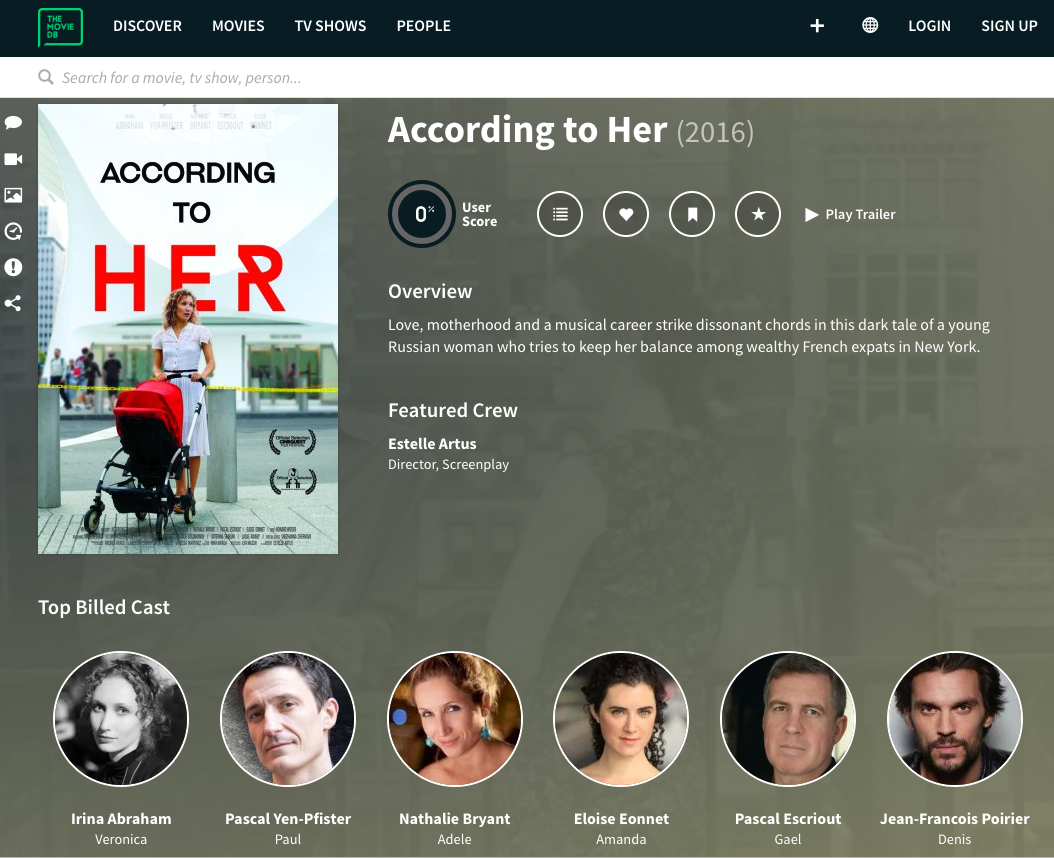 As we watch Veronica’s emotional threads unravel, we witness a tale of a woman in conflict, torn between practicing her art, bonding with her child, and pleasing those around her. It’s an impossible task, one that weighs heavily on this story’s protagonist and causes the viewer to reflect on her own life choices in a deep thought-provoking way.

According To Her reviewed in Agnes Films: read it here

“According to Her” showcases outstanding performances and is packed with rich visual and emotional details. 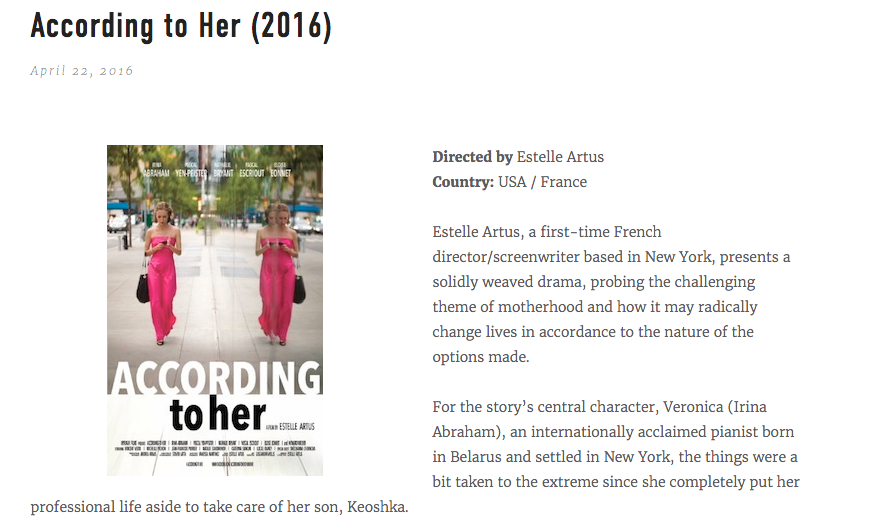 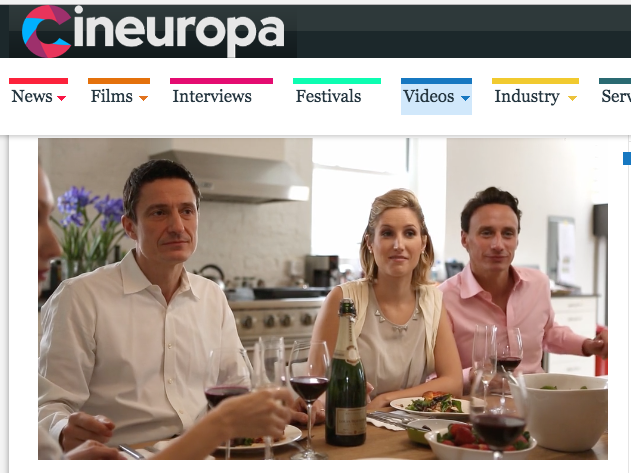 Watching it, I discovered a wonderful sensation that I seldom experience in films. It’s one of being a complete outsider in a world in which you are deeply immersed. It’s a feeling that no matter what you’ve done, no matter where you are, you are not of that place.

Wonderful Chris Garcia‘s review of According To Her in Klaus at Gun Point.

A lot of people don’t realize how much in the dark a director is at the beginning of filming. It’s like sailing by night in high seas, you don’t see anything and everybody relies on you. What makes a director is not that he or she gives direction, it’s the ability to step in the dark and find a path while giving others a feeling of security.

Working on a new trailer and poster, share your thoughts! 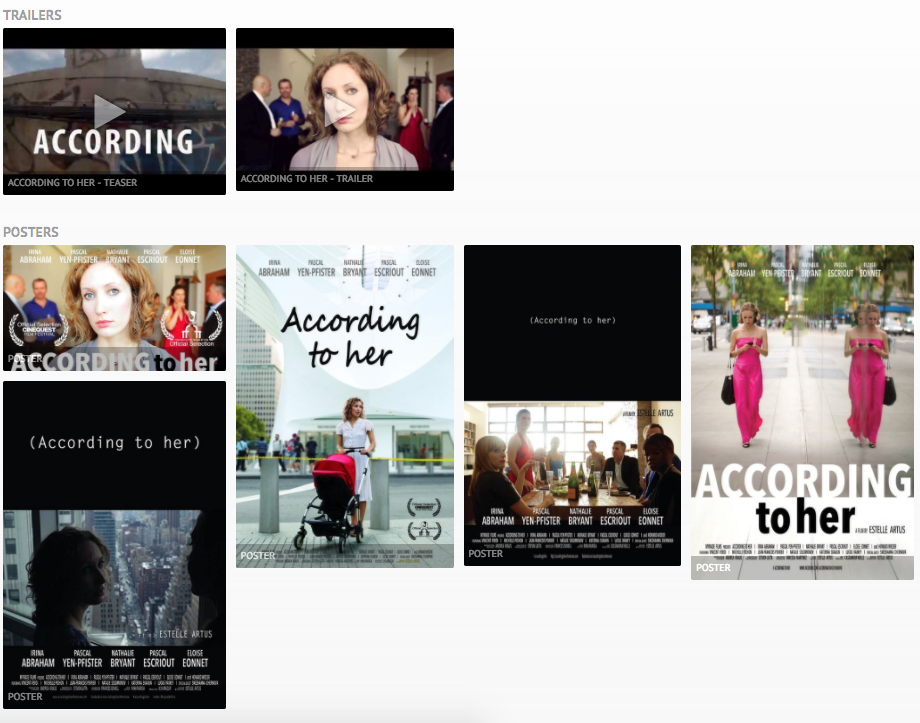 Being in upper class New York, our characters are destined for success. Our heroine is expected to be a mother while maintaining a brilliant musical career and her slim figure. Motherhood can and should be greatly assisted by nannies and boarding schools, while the physical and financial expectations are impossible to avoid.

Angeliki Coconi review of According To Her in Unsung Films.

More press reviews and pictures of our world premiere at
CINEQUEST FILM FESTIVAL on According To Her‘s IMDb webpage.

At Cinequest, Estelle Artus is invited to a panel about women directors today
moderated by Robert Hawk.

Intelligent and provocative, Estelle Artus’ According to Her is a captivating post-modern story about a woman motivated to rediscover her musical talent while navigating the demands of maternity. 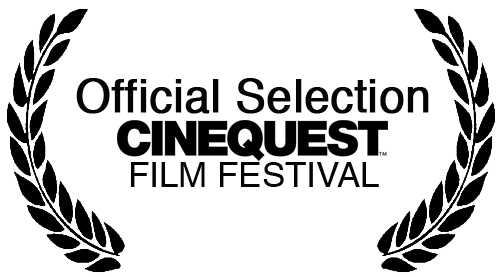 Just before reaching the pinnacle of fame, Veronica, a brilliant pianist, must decide between seizing the chance at eternal notoriety or sacrificing it all to raise her son. Distraught by her dilemma, she retreats into an indefinite hiatus from performing. Just before becoming complacent as a homemaker, she meets Amanda, an alluring, promising, and younger pianist who threatens Veronica’s return to the music world and disrupts the family. 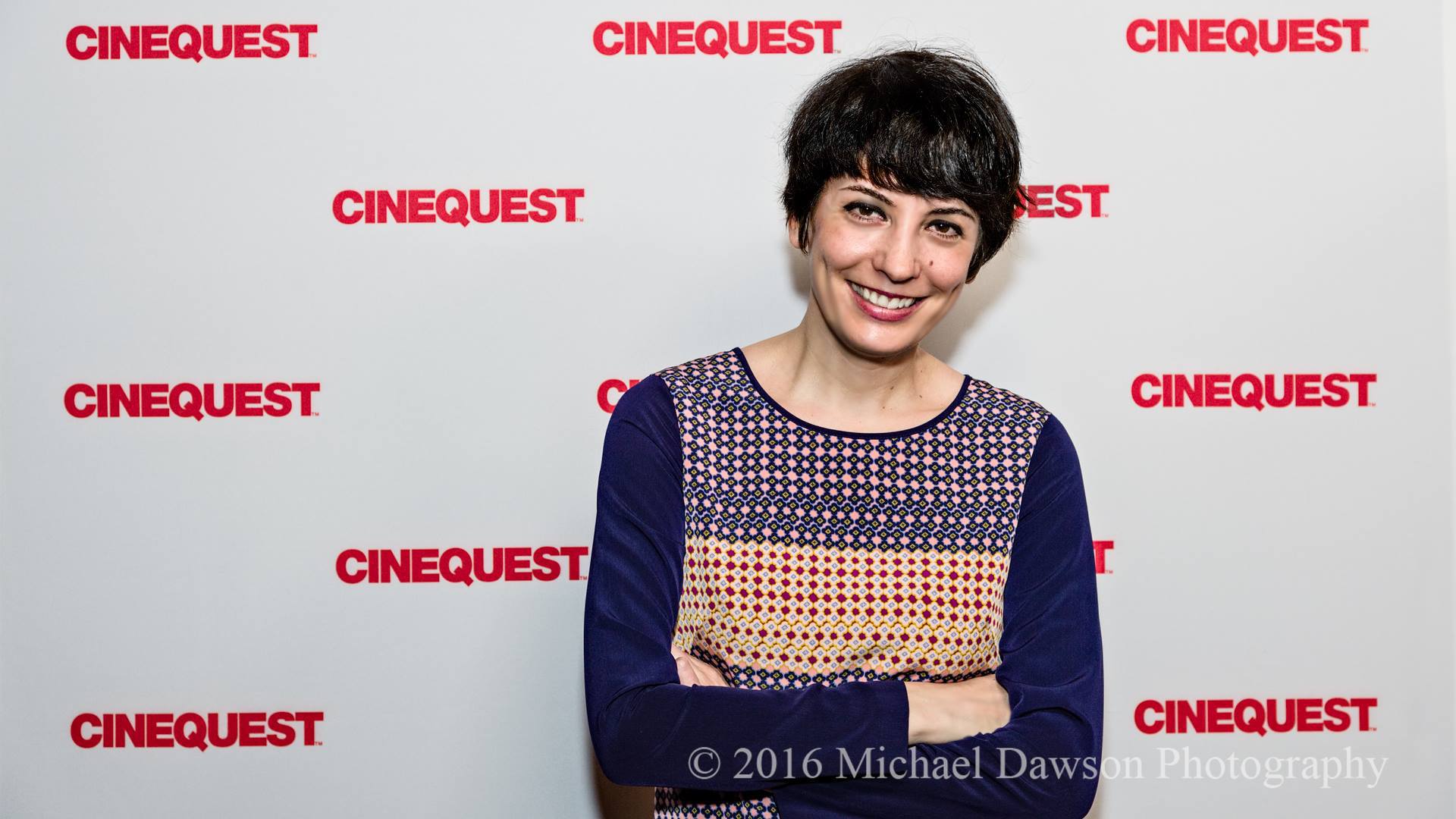 According to Her World Premiere
at
Cinequest Film Festival.

Director and producer Estelle Artus and Actress Nathalie Bryant will be attending all the screenings and Q&As. 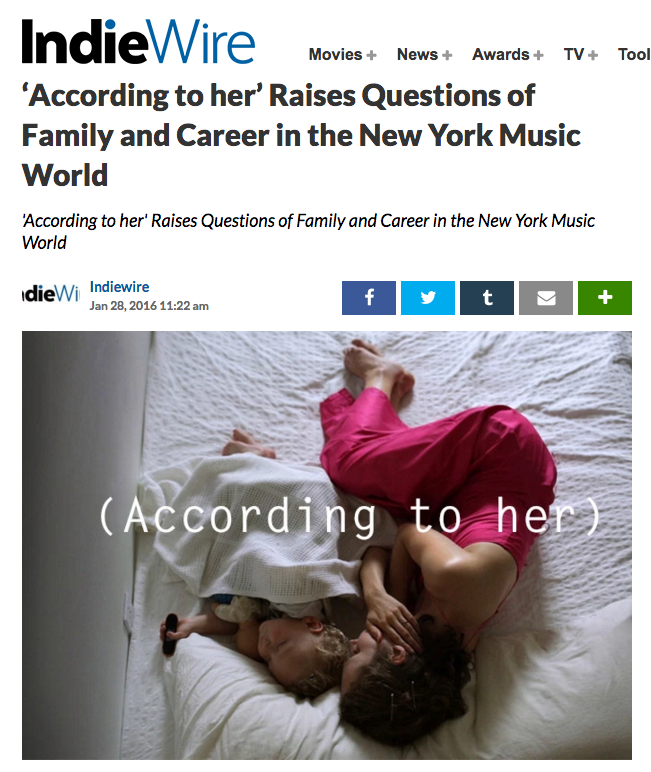